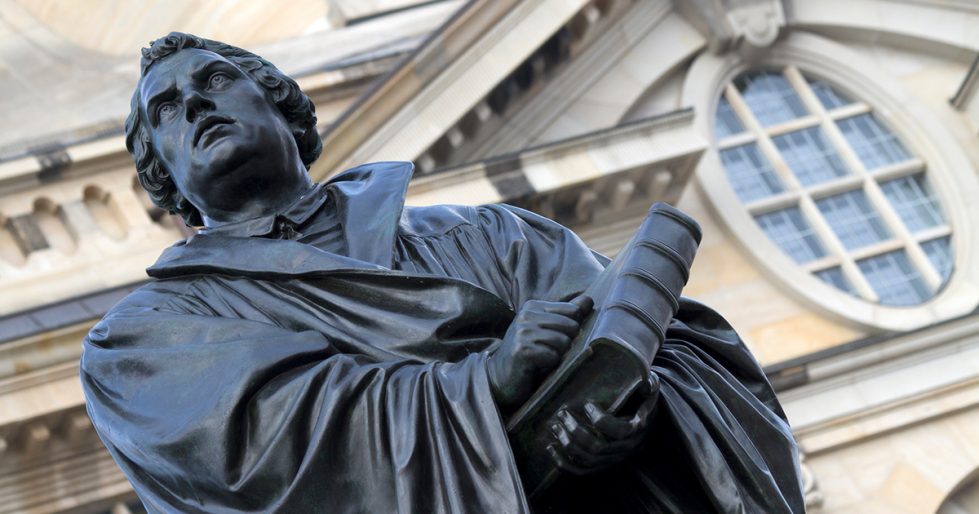 We live in a world of multimedia where we connect via Facebook, Twitter, Instagram, Pinterest, Google and YouTube. Our daily lives are run by apps on tablets, smartphones, smartwatches and exercise devices. In the medical field, we benefit from retinal implants, artificial pancreases, bionic limbs and lenses. Technological advances bring us camera pills, tooth chips, brain implants, artificial memory and artificial intelligence — the boundaries between human and machine blurring with every passing day.

On October 31, 2017, the world will commemorate the 500th anniversary of the Reformation. Five hundred years ago, Martin Luther sent his Ninety-Five Theses or Disputation on the Power of Indulgences enclosed with a letter to Albert of Brandenburg, the Archbishop of Mainz. Luther may have also posted his Theses on the door of All Saints’ Church and other churches in Wittenberg on 31 October or in mid-November in accordance with university custom. From a historical perspective, the Reformation is much too complex to reduce to a single event, but this significant act by Luther focused attention on his protest against papal authority and the teaching of the church.

The Late Medieval Period of European history generally comprises the 14th and 15th centuries. Around 1300, centuries of prosperity and growth came to an end due to a series of plagues and famines which reduced the population by half. Along with these calamities came social unrest, peasant uprisings and endemic warfare. Even the unity of the Roman Catholic Church was temporarily shattered by the Western Schism. These events contributed to what was referred to as the Crisis of the Late Middle Ages.

Despite these crises, this period was also a time of great progress in arts and sciences. Renewed interest in Greek and Latin texts during the High Middle Ages led to the beginning of the Italian Renaissance. The resurgence of classical ideas and the invention of the printing press became key factors in the distribution of the printed word and the dissemination and preservation of knowledge in standardized form. This created fertile grounds for the seed of the Reformation.

Looking back 500 years to the Late Medieval Period, we are keenly aware of the stark contrast between then and now. Given the huge historical, cultural, and technical divide, one must wonder what, if any, relevance the Reformation still has for us today?

Martin Luther was a son of his times. Like many others, he wrestled with profound “angst” and uncertainty regarding the state of his soul. The key question for him was, “Wie bekomme ich einen gnädigen Gott?” — “How do I find a merciful God?” His search for consolation and hope drove him into the arms of Scripture. It was through his study of Scripture that he found the answer to his uncertainty in the words of the Apostle Paul, who claimed, “For we maintain that a person is justified by faith apart from the works of the law” (Rom 3:28). Luther realized that the righteousness of God is revealed not in or through the church, but by the gospel through faith in Jesus Christ. Sola Fide — Faith alone.

Even though Luther opposed the papacy and the practice of indulgences, he realized that on his own he would not transform the church — rather, the Word of God would do that!  He said, “In short, I will preach it, teach it, write it, but I will constrain no one by force, for faith must come freely without compulsion. Take myself as an example. I opposed indulgences and all the papists, but never with force. I simply taught, preached, and wrote God’s Word; otherwise I did nothing. And while I slept [cf. Mark 4:26-29], or drank Wittenberg beer with my friends Philip and Amsdorf, the Word so greatly weakened the papacy that no prince or emperor ever inflicted such losses upon it. I did nothing; the Word did everything.” Sola Scriptura — Scripture alone!

This of course, only worked, because Luther succeeded in giving God’s Word to the German people in a language they could understand. His translation of the Bible into German was arguably the single most important event that shaped the German language. Luther’s genius was his remarkable ability to bring the sense of the text into authentic German! He desired to express the Hebrew of the Old Testament in the best possible everyday German — sometimes with great difficulty. “We are now sweating over a German translation of the Prophets,” he wrote. “Oh, God, what a hard and difficult task it is to force these writers, quite against their wills, to speak German. They have no desire to give up their native Hebrew in order to imitate our barbaric German. It is as though one were to force a nightingale to imitate a cuckoo, to give up his own glorious melody for a monotonous song he must certainly hate. The translation of Job gives us immense trouble on account of its exalted language, which seems to suffer even more under our attempts to translate it than Job did under the consolation of his friends, and seems to prefer to lie among the ashes.”

More than 400 years later, in the post WWII era, there was a desire in the English-speaking world for a meaningful, contemporary translation of God’s Word into English. And so, the New International Version was born. The Committee on Bible Translation stood on the shoulders of giants such as John Wycliffe, William Tyndale, and the translators of the King James Version. However, by the mid-twentieth century, the English language had changed such that most ordinary people could not understand Elizabethan English well. Biblica accepted the challenge to sponsor this contemporary English translation which became known as the NIV and attempts to be faithful to the source languages in which the Bible was written, while being focused on communicating this in meaningful contemporary English — hence, the balance between accuracy and readability.

But back to the Reformation. Ironically, the most revolutionary contribution of Martin Luther as Augustinian monk was that ordinary Christians are spiritual and religious. The biggest impact of the Reformation was most probably that of subverting the saint, redefining religious life, and sacralizing the secular. Luther believed that neither ordination nor religious vows make one spiritual or religious; rather, it is achieved through baptism and faith. Against accepted belief, Luther claimed that the common people are spiritual. The common people are the priesthood. Therefore, the ordinary Christian does not need a priesthood to bridge the divide between the common and the holy. By faith, through baptism, all Christians “are a chosen people, a royal priesthood, a holy nation, God’s special possession”, in order that we “may declare the praises of him who called you out of darkness into his wonderful light.” (1 Peter 2:9)

As children of the 21st century, we live in a post-modern world — a dark world despite all the technological advances — a world of relativism and skepticism, where the old reliable norms are being called into question and the old foundations are eroding. Much of this is a reaction to the optimism of modernity which stated that by using our reason and our senses we can achieve verifiable, objective truth by getting behind the narrative and the story.

There is no longer a single frame of reference to help us understand ourselves and the world, rather we live in a network of narratives and stories, each competing with one another to define us and explain our world. In almost every walk of life, whether politics, philosophy, theology or ethics, there is a renewed appreciation of narrative and story. Not surprisingly, this takes us back to Luther, who discovered the power of the narrative of God and His people that replaced the false securities and eroding foundations of his day. In our post-modern world with its relativism and skepticism, Luther’s focus on Scripture as identity-shaping narrative highlights the relevance of the Reformation.

While we read, study, and interpret Scripture, Luther emphasized that ultimately Scripture reads, studies, interprets and transforms us. Luther writes, “Note well, that the power of Scripture is this: it will not be altered by the one who studies it; instead it transforms the one who loves it. It draws the individual in — into itself — and into its own powers.” As we become drawn into the story of the Bible, we begin to view the world through new eyes and the biblical drama becomes the key that unlocks our life, the narrative that helps us to interpret our world. Instead of simply viewing the Bible as meaningful to our life, we discover that our life becomes meaningful considering the story of the Bible. This, of course, stands in opposition to the modern approach, but interestingly lines up very well with a postmodern understanding of narrative.

In a bits-and-pieces culture of pessimism and skepticism, where we are increasingly accustomed to being fed snippets of information on Twitter, Facebook, Instagram and Snapchat, Luther’s focus on the transformational power of the biblical narrative calls us back to Scripture to engage the narrative of God’s redemptive plan with Israel and the nations, and there to find the key to our identity and the meaning of our life.

Hans Combrink
Vice President, Global Translation at Biblica
Hans serves as Biblica’s Vice President of Global Translation and, since 2013, Area Translation Director, East Asia Pacific. With more than fourteen years of cross-cultural experience serving local language communities, Hans brings a unique perspective and skillset to the organization. He is instrumental in Biblica’s work of providing God’s Word in accurate, contemporary translations and formats all around the world.
He was with Wycliffe Bible Translators and SIL in Malaysia from 1999-2015 as linguist-translator of the Kenyah Bible translation project and SIL Malaysia Director.