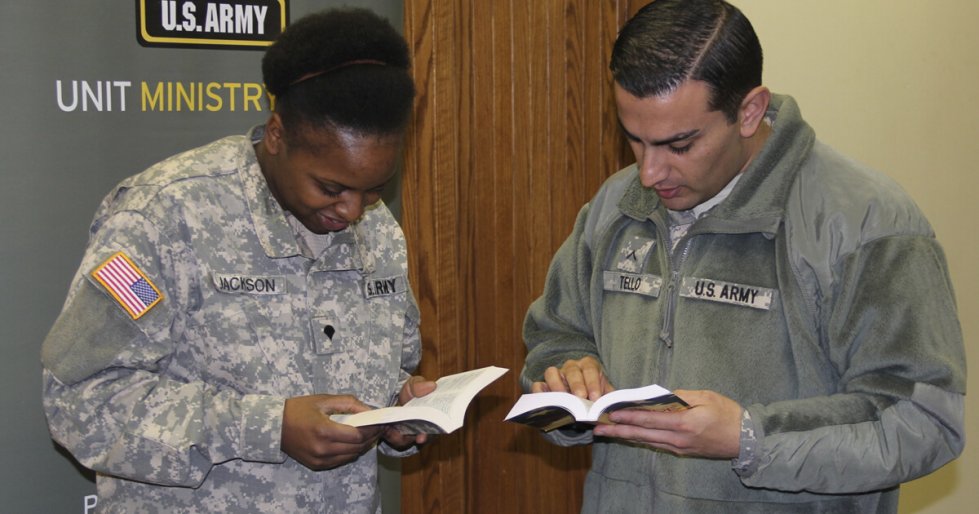 Military chaplains are unsung heroes. Their greatest achievement—quietly meeting the spiritual needs of America’s service members—will never be noted in any official record of their service. But they serve anyway. Biblica supports US military chaplains by equipping them with Bibles for soldiers and their families.

Every member of the US military has an official biography, noting their accomplishments and service record. It is a listing of bravery and courage, of selfless commitment, and of heroics in time of war, conflict, and other emergencies. But for America’s military chaplains, there’s a lot missing from that official biography:

Military chaplains bear the burdens of their fellow soldiers. Just think for a moment about what that means. Think of the burdens our soldiers already bear. Members of the military endure significant hardship and extended time away from home. They are constantly pushed to their physical, emotional, and psychological limits. And of course, many of them sacrifice their lives in the course of serving their country.

The chaplain is there through it all. In addition to bearing their own burdens, chaplains selflessly carry the burdens of the soldiers under their care. As one retired Air Force Chief of Chaplains put it:

Deployments are hard for everyone, but they’re especially tough for chaplains. If anything goes wrong—a death, bad news from home, even a “Dear John” letter—the chaplain is there in the midst of it all.

In my career as a chaplain, I’ve walked on our nation’s battlefields. I’ve stood in bombed out buildings with my uniform saturated with blood. I’ve carried human remains in my hat and held the hands of brave Americans who were breathing their last and going to be with God. I’ve sat by the hospital beds of some of the greatest heroes our country has ever known, and far too many times I’ve stood at Arlington National Cemetery and rendered a final salute to those who had given their all for their country.

But the toughest thing I’ve ever done is a death notification. Knocking on the door in the middle of the night, speaking words no mom, no dad, should ever have to hear—there’s absolutely nothing worse.

In spite of these challenges, the military chaplain corps has the highest retention rate in the military. That’s because these men and women are called by God to walk alongside our soldiers in their time of need. Through your partnership with Biblica, you can walk with them too. You can provide support for them, equipping them with the resources, tools, and ministry materials they need to become effective and compassionate ministers of Christ.

Finding peace in a combat zone

Chaplains face many hardships in their service. But the one thing they should never face is a shortage of is God’s Word. “People are hungry for God’s Word, especially in a combat zone” says Colonel Will Hensen, a command chaplain from Michigan. “They’re looking for the faith and resiliency to overcome the fear of death.”

Working with chaplains across the military, Biblica provides two Bible resources to help meet the spiritual needs of military members and their families:

These Bibles are helping soldiers find faith in God as they serve in harm’s way. “There was not a day that didn’t go by that I didn’t have somebody asking for resources,” says Col. Hensen. “Thank the Lord I never ran out.”

Help support chaplains like Col. Hensen serve the spiritual needs of our US military members. You can purchase military Bibles for your loved ones serving in the armed forces, and you can donate to help us reach even more soldiers with God’s Word! Give now