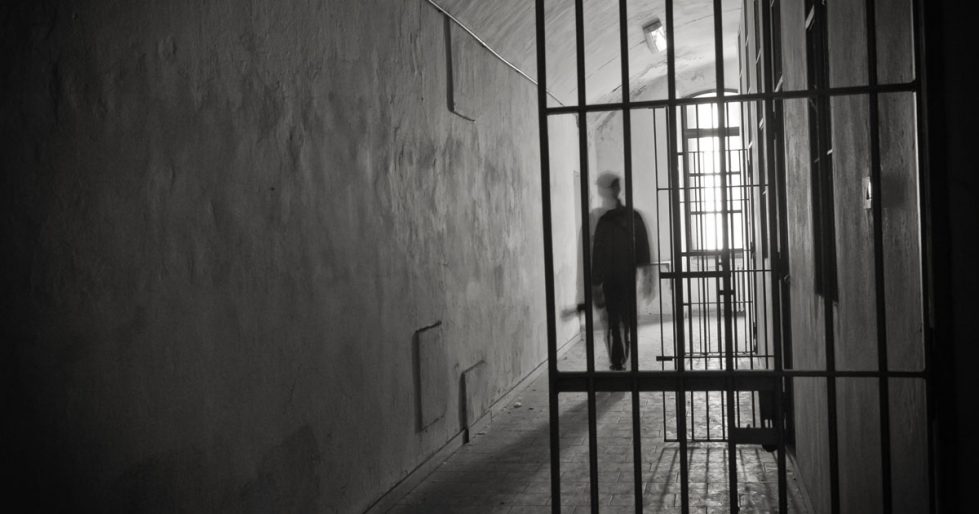 I put the book – an NIV Bible – into one of the nearby cubbies, then remove my watch. I hang my car keys on a hook, but then hesitate with my phone, gripping it jealously in my fist.

“You’ll get it back,” the female guard promises sleepily. She seems quite bored and a little annoyed with the whole process of dealing with today’s visitors.

I reluctantly relinquish my iPhone.

“ID,” she says, without looking up from her computer.

I produce my driver’s license and she checks this against her list.

I give her the name.

She glares at her computer. Then, “CSP.”

Handing back my ID, she grunts, “Next…”

The sense of anxiety that has been building since I began the drive from my home in Colorado Springs is now rapidly rising. What am I doing here?

I see a burly male guard impatiently waving me forward, inviting me to walk through a metal detector. He looks about as interested in his job as the woman at the computer.

When I successfully pass this gauntlet without setting it off, he begins patting me down.

“No weapons… no sharp objects…”

He turns me around, makes me hold my arms out to my sides. Then, “Pockets…”

When I give him a quizzical look, he responds with a slightly perturbed, “Show ‘em to me!”

After pulling out my ID, I turn both of the pockets on my jeans inside out, revealing nothing but lint.

He nods and aims a giant thumb at the cramped waiting area: two rows of cheap plastic chairs arranged crookedly on a faded yellow, linoleum floor.

Again, the question rises inside my head: What am I doing here?

There are a half dozen people already seated: a young woman dressed in short-shorts and a halter top, plenty of tattoos exposed; another woman with two small children – a boy whining, stomping and pulling at her skirt, a little girl sitting quietly in her lap; a middle-aged woman wearing a large splint on her leg; another youngish woman with pink hair wearing torn jeans and a sleeveless shirt; an elderly couple engaged in a rather heated conversation…

I notice a shadow on the floor and glance over to see an enormous man hovering at my right shoulder. He reeks of B.O.

I nod, then realize he expects me to give “his” seat back to him.

When I get up, he falls into it heavily. I decide to stand.

Leaning against the wall, clutching my ID, I watch the line progress slowly through the metal detector, watch the guards pat people down, and think to myself yet again: What am I doing here?

To counter the anxiety, I remind myself that God is in this. My mind instinctively and pessimistically adds, He better be…

My road to the CSP began with a Bible passage. I was reading the part where Jesus is talking about the sheep and the goats. He praises the sheep for doing what they were supposed to do. But the goats, He takes to task. It ends with an exchange that is both frightening and convicting:

“They also will answer, ‘Lord, when did we see you hungry or thirsty or a stranger or needing clothes or sick or in prison, and did not help you?’

“Then they will go away to eternal punishment, but the righteous to eternal life.”

Ouch! Right? Eternal punishment in the company of the devil for failing to help those in need? And the revelation that in so doing, we fail to minister to Jesus Himself…? Yikes!

It’s definitely a sobering section of Scripture. And it made me start to wonder how I could do what Jesus clearly expects us to be doing. How could I help those in need?

One way that came to mind was writing to prisoners. Someone at church mentioned this and it seemed perfect. Not only would it allow me to use my skills as a writer to bless someone, but it would enable me to “do for the least of these” without a lot of effort. I wouldn’t have to go anywhere. It would be simple and easy. I could just sit at my laptop and compose encouraging letters to lonely prisoners.

In pursuit of this “mail-it-in” ministry, I found a website that offered a means of emailing inmates. It was perfect, I decided. I wouldn’t even have to print anything or worry about postage. Just write a cheery note and hit “send.”

Scanning the prisoner profiles, I saw a likely candidate. His name was Robert: a young African American who looked like he could use a friend. I read a little about Robert and decided to be his pen pal.

And so I wrote my first email.

To my surprise, a few days later, Robert wrote back. I wrote again. He wrote again. After about a month of this, he asked in an email, “Can you come visit me?”

There’s a scene in the movie “You’ve Got Mail” where Tom Hanks asks his email love interest, Meg Ryan, if they can meet. Since they have never met in person, and for all she knows, he could be a wacko, she physically recoils when reading his request. She then snaps her laptop shut in something close to a panic. Meet?!

After considering this for a couple of days, I finally responded: Yes, I would visit him. He soon provided details and instructions regarding the visitation application process. He also added a new piece of information: he was on death row, convicted of murder.

A few weeks later, here I am, in the prison waiting room, clutching my driver’s license in a sweaty hand, nervously waiting for a shuttle to take me to see a virtual stranger who apparently killed someone in cold blood.

When the bus pulls up outside, people rise and begin filing out the door without being directed. They take seats on the bus and sit gazing out the window, as though they’re part of a tour group bound for the Grand Canyon. They’ve obviously done this before.

I follow, feeling out of place, awkward, and more than a little intimidated. I slide into an empty seat and moments later, the driver shuts the door. The engine groans and we roll away from the visitor’s center, toward a huge gate topped with barbed wire.

What I don’t know yet is that there will be several more security checks before I am led into a small booth where I will sit for two hours, face to face, with Robert – a sheet of plexiglass separating us. What I also don’t know is that I’ll be back. I’ll visit Robert numerous times before he is transferred to another facility. I’ll hear his version of the events that led to his incarceration. We will gain each other’s trust. We will become friends.

In the coming months, we will have many long, serious discussions about God. We’ll talk about Jesus. We’ll talk about Scripture. And because he is not allowed to have a Bible or any other books in his possession, and I can’t bring one in, I will have to memorize passages so that I can recite them and we can discuss them together.

Driving to Canon City, going through visitor processing, riding the bus, sitting across the plexiglass from Robert… It will all become almost routine. I’ll get used to the searches, the sense that I’m being watched with suspicious eyes by dozens of cameras and guards, and the knowledge that at any moment, something bad could happen because I’m in a bad place, and some of the people here wouldn’t think twice about doing bad things if they had the chance.

Eventually, I will realize that although ministering to “the least of these” can be risky and uncomfortable, it’s worth it. And it will soon become obvious to me, as I visit Robert in prison, that we are not alone in that little booth. Jesus is there too.

Join us in sharing Scriptures with those who so desperately need the hope that only God provides. Your gift of $20 will provide Bibles for 5 inmates, allowing them to hear and respond to God’s invitation to spiritual freedom.