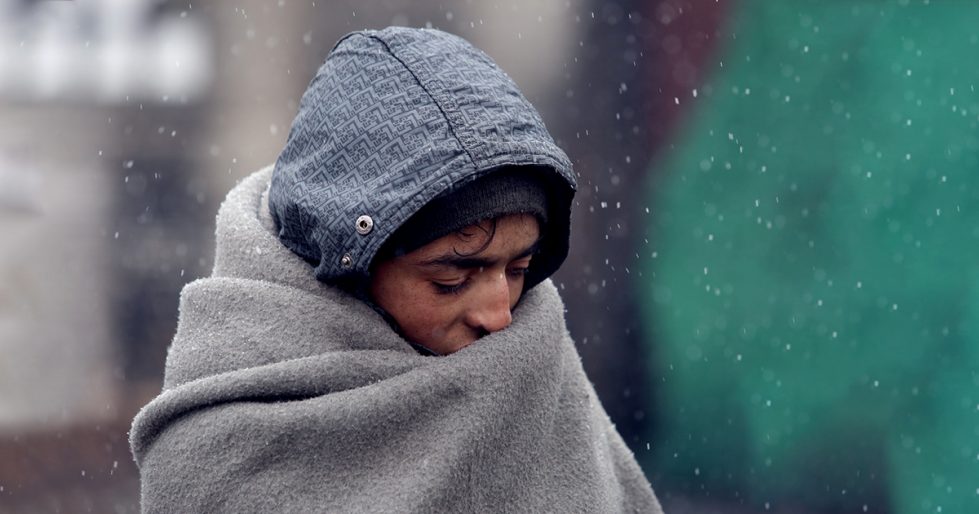 In the middle of the night, surrounded by wilderness, the old woman begged the guide not to leave her behind.

Zahra had joined a group of people attempting to escape their strife-ridden homeland and cross the border to safety in a neighboring country. But the crossing was not easy: the roads were dangerous, the surrounding terrain rugged, and the old woman very frail.

“If you can’t keep up, I am leaving you behind,” the guide warned Zahra again. “If we wait for you, when morning comes we may be seen and there will be trouble for everyone.”

He walked away, ignoring the tearful pleas of the woman.

Zahra tried to walk faster, but she continued falling behind until she found herself alone in the darkness. She was crying harder now.

Someone must have heard her, because a man came back and offered to help. Kneeling, he helped Zahra up onto his shoulders. Bearing the old woman, the man began the trek across the uneven terrain. Before long, they could see shapes moving in the darkness ahead of them—they were catching up with the group!

Soon, they found themselves at the front of the group. The man continued carrying Zahra the rest of the night until, shortly before sunrise, they crossed the border.

“You are safe, now,” he assured the woman as he lowered her to the ground.

Thanking him over and over, Zahra asked the man for his name so they might stay in touch.

“I will send someone to let you know who I am,” he promised as he prepared to leave.

Zahra found herself in a small camp. Later that day, missionaries visited the camp, bringing with them Bibles, magazines, and other literature translated and provided by Biblica. Meeting Zahra, one of the things they gave her featured a picture of a man carrying a lamb on his shoulders.

She gasped. “Who is this man?”

As they began to tell her about Jesus, she became increasingly excited. “You don’t understand,” she said. “This is the man who carried me across the wilderness and took care of me last night!”

It’s no surprise that, after hearing more of what the missionaries had to say, she accepted Jesus as her Lord that day.

Abandoned by others, Zahra had not been forgotten by Jesus.

She had not been forgotten by the missionaries who answered God’s call on their lives by taking His love to families in refugee camps.

Finally, she had not been forgotten by people whose donations make it possible for the translation and distribution of life-giving Bibles and literature. When missionaries, pastors, and others are equipped with native-language tools for sharing the Good News, it makes all the difference in the world—and in eternity.

Thank you for making that kind of difference possible for this precious woman (and for so many others, too—by the end of this year, Biblica supporters through the years will have provided more than 3 billion people with contemporary translations of the Bible in their native languages.)

You have not forgotten the vulnerable and abandoned and, because of your faithfulness, real people are being rescued and transformed every day.