Prayer is one of our principle forms of communication with God. In Scripture, Paul exhorts us to make prayer a lifestyle and “pray without ceasing.”

As central as this spiritual discipline is to our relationship with God, it can nevertheless be challenging to model, teach, and encourage others to practice. Especially children.

That’s why Candy Marballi, Vice President at 40 Day Prayer Covenant, is so excited about “The Prayer Covenant for Kids.” Created in partnership with Biblica, this powerful tool not only instructs children in how to pray, it helps them do it together.

Candy had the idea for a prayer booklet back in 2010. That’s when she heard Dr. Jerry Kirk, founder of 40 Day Prayer Covenant, speak, inviting listeners to join him in a prayer covenant. Kirk issued this challenge: “If you pray for me for 30 days, I’ll pray for you.” Over 500 people entered that prayer covenant with him.

“If you know Jerry,” Candy says, “you know he prayed for every single person by name. He’s going to be 87. He’s a great man of God.”

Kirk, Candy, and the 40 Day Prayer Covenant ministry seek to be “a catalyst for an awakening to the supremacy of Jesus Christ as Lord throughout his church and his world.” Their mission is to “inspire and encourage Christ-centered covenant prayer partnerships” to “empower discipleship, transformation and evangelism.”

For three years after hearing Kirk speak, Candy continued the prayer covenant. “I included that covenant in my prayer time every single day,” she explains. “I was experiencing power from it. I was a children’s choir director at the time and involved in a ministry to at-risk children in public schools. I said to God, ‘Show me clearly what you want me to teach the upcoming children’s choir.’ And He gave me a vision of the kid’s prayer card.

“I remember jumping off the couch and running to my husband’s office and saying, ‘What should I do?’ And he said, ‘Call Jerry [Kirk]. I think he’ll love the idea.’”

So she called him. “I said, ‘Have you thought about putting this into a language that would speak to the heart of a child?’ And he said, “No, but if you assemble a team of educators to work alongside your team, we’ll see what God does.’”

It took about four months to put together the prayer card. Then Candy was asked to write a book that would take parents and teachers through the 10 themes of the prayer covenant with their children, teaching them how to pray and nurture their prayer lives.

“We launched [the book] at the Best Practices 4/14 Conference in New York City in October 2014,” Candi says. “After that, I was asked to share with the African delegates. I did and started receiving emails saying the book worked with their kids, asking for permission to translate the book and use it in various ministries.”

That’s how the 40 Day Prayer Covenant For Kids got started.

The tool not only helps children know the value God has placed on them, but His unconditional love for them, His desire to connect with them through prayer, and gives them Scripture to memorize and pray.

“It’s so important that children learn to hide God’s Word in their heart. That’s something no one can ever take away from them. It gives them great hope and love and peace.”

Candy says the children’s version of the prayer covenant is now being used in 48 countries. So far, over 1,000,000 children have been discipled through the program and the reach is continuing to grow. One hundred thousand copies were recently printed in Arabic for use in the Middle East.

“It’s wonderful when you have something that works. The word is spreading and pastors are loving this and implementing it in their churches.” Schools are also using it. Ministries serving in refugee camps are using it. “It’s helping those children learn how to love and forgive. They’ve been through so much pain.”

Adding the Scripture component to the covenant was critical. That’s where Biblica came in.

“We’re really excited about partnering with [Biblica],” Candy says. “You’re the best of the best. We’re blessed knowing you all and your heart for the Lord and missions. There’s a lot to celebrate.”

You can be part of what God is doing to reach and encourage children all around the world through the 40-Day Prayer Covenant for Children and other age-appropriate, Scripture-based resources.

Partner with us today to put God’s Word into young hands and see their lives transformed by Christ. 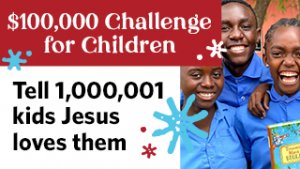